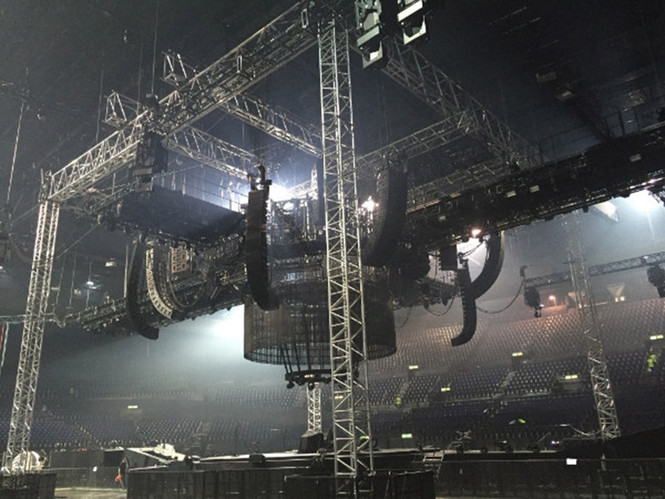 ZURICH, Switzerland - For Muse's two 'Drones' tour shows at the 13,000-capacity Hallenstadion in Zurich on May 11 and 12, ceiling weight limitations meant that the complete Muse stage had to be supported by a giant ground support system. Malecon Ltd. turned to Prolyte as part of the staging and rigging solution.

Enough said and written about the Muse Drones tour, setting records and raising standards in live performance and introducing the unmanned flying object in the world of entertainment. What more can we add to this?

Not much, but since all things that are flown overhead need support at one point, that is where this story starts. For a large show you normally need a lot of loading capacity and sometimes the existing loading capacity is just not sufficient, like in the Hallenstadion in Zurich, Switzerland.

For every problem there is a solution and is this case the solution was offered by Malecon Ltd. Known for their expertise in heavy lifting and for their large stock of extraordinary strong truss, they were called in for help.

The stage setup is an 'in-the-round' setup, with a circular stage in the middle, with catwalks on either end of the stage. Above that are the space station and decking that accommodate the drones and technical staff. There are also retractable video screens using projection, a spherical 360 screen over the main central stage.

The complete Muse stage had to be supported by a giant ground support system, since the roofing of the Hallenstation did not have sufficient loading capacity.

After some thorough calculation, Malecon brought in a ground support system based on the Prolyte CT tower system with D75T truss as towers and M145RV and B100RV truss for the grid. On top of this grid Malecon added an extra layer of M145RV (Mammoth) truss to gain sufficient height and strength to accommodate the complete set.

The total dimensions of the ground support were 22 x 22 meters width and 16,5m. height. The whole system carried 32 tons of load.

As Thorsten Klein commented: This was quite a challenge for us, we knew we had to fit the weight of the complete stage setup underneath our ground support system. This offered not only challenges weight wise, but also to reach the required trim heights. With the Prolyte M145RV truss we were sure we could handle the brief. The loading capacity of this truss is massive, we were fully confident of this system”.

The M145RV truss was developed for special applications where extreme loads or circumstances require massive strength, spans up to 30 metres are no challenge for this truss; exactly what the Muse gig required.